It is known that any new version of any piece or program in our devices will work more smoothly and quickly than the previous version, especially with hardware devices, as we had a previous appointment with a detailed look at the PCIe expansion slots, and today we are going to talk about the new version of it PCI Express The long-awaited 4.0 has finally arrived for PC, at least if you buy a new PC or upgrade your hardware you can choose PCIe 4.0 which is much faster than the current version 3.0, but what is PCIe 4.0? Will it help your system boot faster? Here are the new features in the coming lines. 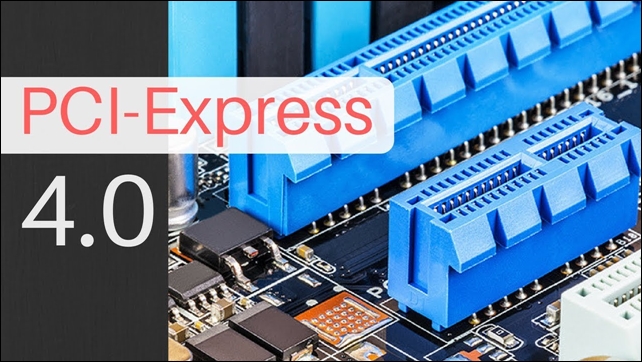 What is PCIe in general?

The Peripheral Component Interconnect Express (PCIe) standard is a common motherboard interface that allows different units of system hardware to communicate with the motherboard and other parts of your system, specifically PCIe related to system expansion cards such as a graphics card (GPU) or a sound card. Or a Wi-Fi or M.2 NVMe SSD card.

As with most things the higher the number the faster the connection, this release is the fourth iteration of the standard as details of the PCIe 4.0 standard were published back in mid-2017, however it has taken so far for any motherboard or chipset manufacturer to implement the new standard on upcoming devices.

Read also: Does the speed differ when connecting an NVMe hard drive to a PCIe and M.2 port? 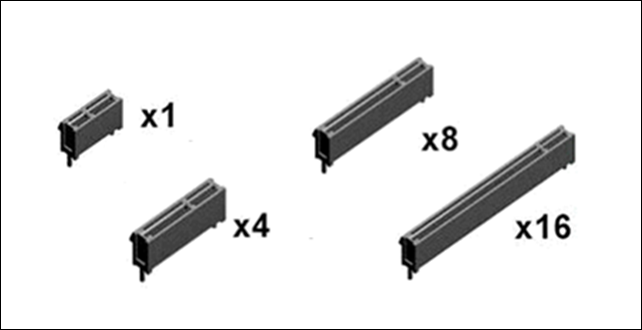 PCIe slots come in several sizes: x1, x4, x8 and x16 The numbers show how many lanes a PCIe slot has More lanes equals a faster data connection Most modern expansion cards work better in the x16 slot This is because it has the fastest data transfer rate For example, a modern GPU will use an x16 slot to transfer data quickly to ensure a smooth and consistent gaming experience. 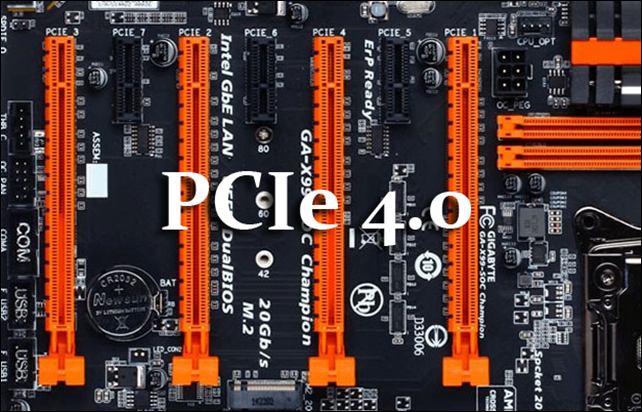 Yes PCIe 4 is faster than previous generation PCIe 3 It’s almost twice as fast doubling the data transfer rate to 16 Gigabits per second (G/Ts), however G/Ts is not a useful data transfer metric for the vast majority of people, in more useful terms The x16 PCIe 4.0 slot has one-way data transfer of up to 32 GB/s, this means you can get a maximum of 64 GB/s flow in both directions, however using more than 64 GB/s is tricky A bit because you don’t achieve this one-way rate.

What hardware does PCIe 4.0 accelerate?

Some parts of the hardware will receive a greater PCIe 4.0 performance boost than others. PCIe updates affect your system expansion cards like Wi-Fi, Ethernet, and your graphics card. However, the update doesn’t always provide an immediate boost, because some of your system hardware is already running on its capacity. Take a card Your graphics boosting idea is great isn’t it? 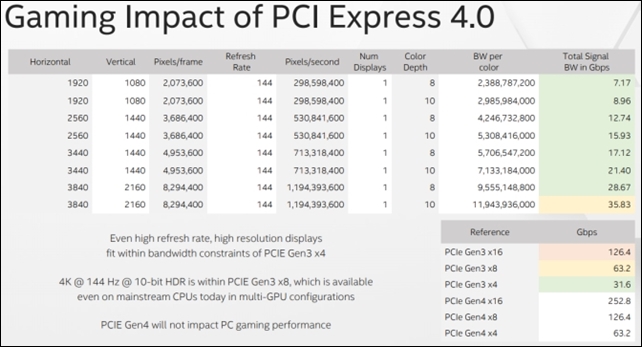 Well unless you have a 3840 x 2160 resolution with a 144Hz refresh rate, it won’t even top the current PCIe 3.0 standard, Intel’s research on the impact of PCIe 4.0 gaming shows that today’s hardware still has a performance gap before surpassing the current standard, check From the table above, which details the bandwidth of different resolutions.

The biggest immediate performance gain of PCIe 4.0 comes in your system storage. Corsair’s Force Series MP600 M.2 PCIe 4.0 SSD supports data transfer rates of up to 5Gb/s – that’s fast! You have to assume that a significant increase in temperature accompanies an increase in PCIe 4.0 speed and that is another thing to consider. 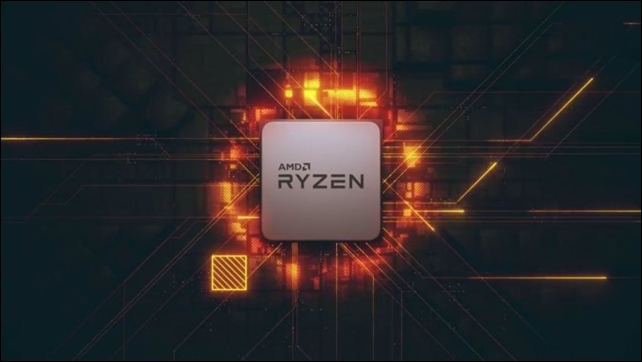 The introduction of new hardware that supports PCIe 4.0 is what catches the attention of businesses and consumers alike, but when it comes to the AMD X570 chipset, be aware, as AMD’s Ryzen series of CPUs continue to use the same processor socket: AM4.

Your Ryzen CPU is interchangeable for any AM4 motherboard regardless of processor generation, the difference now for AMD CPU owners is that if you want to take advantage of the faster PCIe 4.0 standard you need a new motherboard built with the new standards.

The new AMD X570 chipset supports PCIe 4.0 out of the box. Prior to the announcement, indirect updates were adding PCIe 4.0 support to some AMD motherboards, especially the higher-spec X470 and X370 models, but due to the requirements of the PCIe 4.0 standard it is not possible to perform retroactive updates for each Chipset AMD will not release PCIe 4.0 updates for existing chipsets. 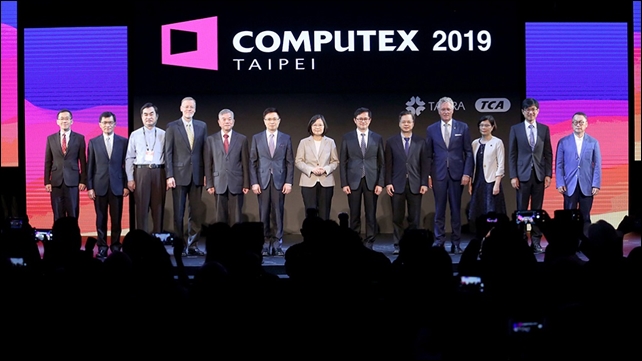 On the other hand, you can buy a storage system pre-configured for PCIe 4.0, at Computex 2019, a global conference for computer development, Gigabyte announced an outrageous 8TB PCIe 4.0 SSD, technically there are four 2TB hard drives built into the card One GPU-style expansion and an impressive 15,000MB/s read/write rate.

If that sounds like an overkill, GIGABYTE has also launched an AORUS NVMe Gen4 SSD, which has a read speed of around 5,000MB/s and a write speed of 4,400MB/s. AORUS comes in 1TB or 2TB sizes.

When will the fifth generation come of it then?

Just as PCIe 4.0 has recently started to unleash the speed, people are already looking forward to PCIe 5.0, because the PCI Special Interest Group, developers of the PCIe standard, announced PCIe 5.0 shortly after its fourth-generation hardware hit the market, and the final PCIe 4.0 specification arrives two years later. From the scheduled date causing some interference between the two, PCIe 5.0 will double the data transmission bandwidth again, meaning an increase to 32G/Ts or a one-way transfer rate of 64GB/s.

Here’s more: A review of the best laptops in all categories of 2019

So, should I upgrade to this version? 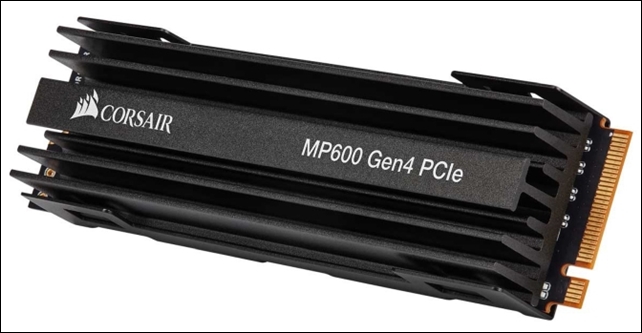 The difficulty here is figuring out where computers are headed. PCIe 4.0 reception is disappointing because it is likely due to the fact that most devices do not use the current PCIe 3.0 standard as well as the knowledge that over the next two to five years PCIe 5.0 will start entering hardware production. So the delay in dealing with PCIe 4.0 creates a difficult situation, if you really want to upgrade and have some money it’s worth it.