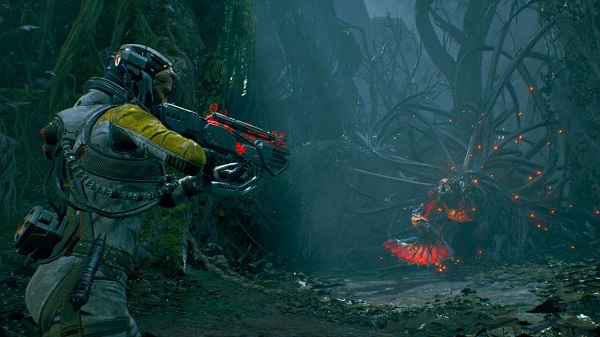 game back Returnal To the fore again during the past few hours through another video review that was revealed through the third episode of the HouseCast program dedicated to Housemarque studio to talk about a group of titles available from him over the past years before passing through the third episode of this program to his next huge title Returnal On PlayStation 5 the new .

Which was revealed during an event Future of Gaming To reveal the PlayStation 5 platform several months ago from now, and we only had to Keep track of the details that are available on the latter Starting from the main game events that lead us to assume the role of Selene after her plane crashes in an unknown planet and she tries to connect with Earth to discover that she is really stuck in this strange world with an innovative playing style that the developer team is betting on.

The thing that continues during the past few moments through this program, during which both Mr. Mikael Averi, the marketing officer, as well as Mr. Harry Krueger, the director of the game, were on a date with the audience to reveal more details about the game based on the data related to the style of play, not to mention highlighting the developer team Its capabilities are for the first time within a third-person AAA project and its first 3D game after a host of previous initiatives on Sony consoles that were top-of-the-line titles.

Director Harry Krueger was on a date through this review to provide us with more details about the gameplay in this project, which turns out to focus on speed in the first place, not to mention the movement or dynamics in terms of fighting with enemies in addition to the director’s insistence on the vertical exploration system and The stages that were built on the basis of this method in a specific way, starting with the use of the paddle, for example, to reach other areas and many other equipment that we will have an appointment with as we see through these quick snapshots, but they are sufficient to provide a larger picture of the game that as we know Officially will be available next on March 19 exclusively on the PlayStation 5 Always, before that date, we can wait for more data and frequent media outputs from the developers. Greetings.