An application that has been on the scene for nearly 7 years, and only a few users have known about it, but it has recently witnessed an exceptional turnout and a huge wave of new account registrations that surprised the application developers. Of course, we are talking here about “Signal”, which seems to many at the present time to be the appropriate answer to the best alternative to WhatsApp that takes privacy seriously. The new WhatsApp policies have angered users interested in privacy as they are given the choice between sharing their files and information with Facebook or to stop using the application . But Signal’s commitment to protecting the privacy of its users isn’t the only reason why it’s a worthwhile app. It offers almost all of WhatsApp’s features so it’ll be familiar to new users, and even adds entirely new features that we’ll highlight in the coming lines. 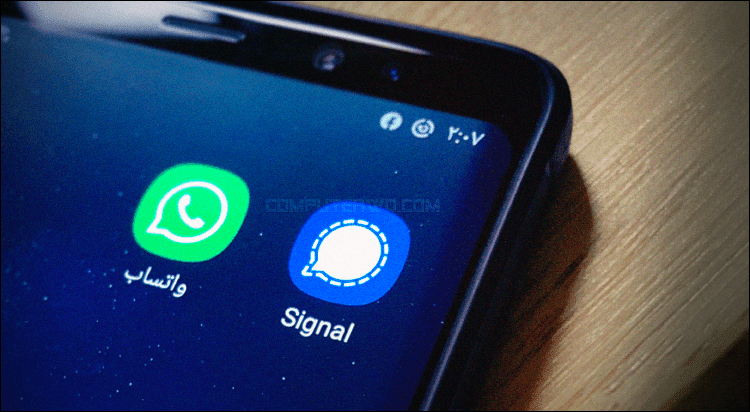 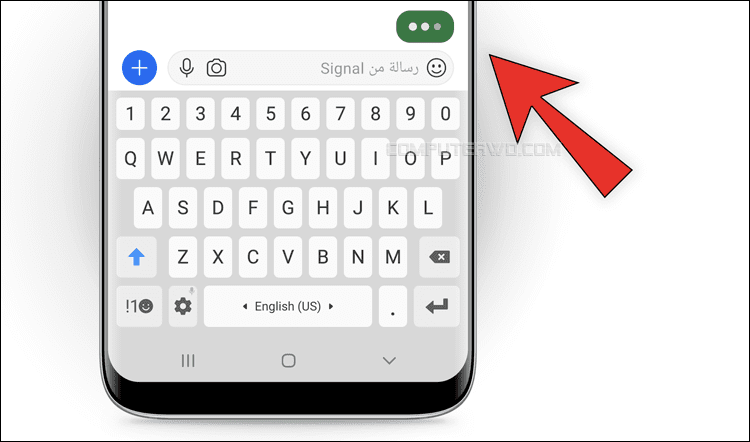 Typing indicators are a common thing to see in messaging apps, as they are a momentary notification to let you know that the other party is typing a message in real time, either in the form of moving points within the conversation environment or the word ‘typing’.

And if you’re talking to someone who’s slow or hesitant about writing, you’ll end up seeing the cursor bounce on your phone screen over and over again, which is annoying sometimes. You may also not want to show this indicator to others when you are talking to them, and fortunately this can be done in Signal. Just go to “Settings” then “Privacy” and disable the “Typing Indicators” option.

Your contacts won’t be notified when you type, and similarly, you won’t see the cursor when someone writes a message to you, whether in a one-on-one or group chat. This feature is definitely not available in WhatsApp, where all you can do is hide the “last seen” and the read messages indicator only, and this by the way is also available in Signal. 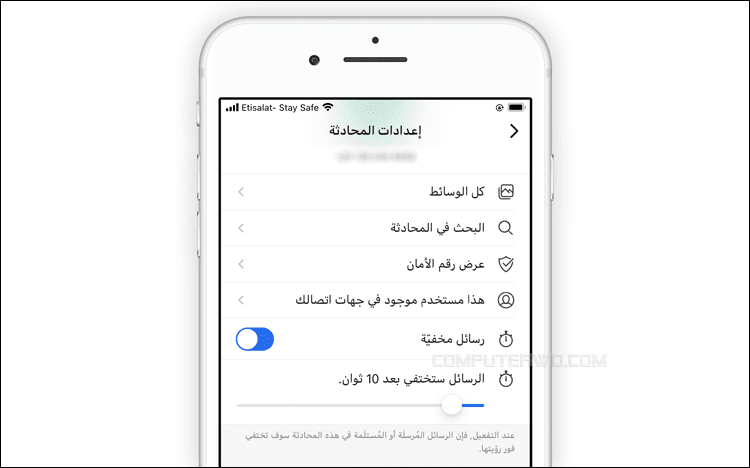 Most messaging apps allow you to send self-hide messages, i.e. messages that are automatically deleted after a certain period of time, which is a useful feature when you are sending sensitive information and you don’t want to stay in the conversation for too long. But the Signal app has a different approach in providing this feature, providing the ability to control how long a message remains in the chat before automatic deletion, which starts from 5 seconds to a week. This is unlike the WhatsApp application, which provides the same “Disappearing messages” feature, but it forces – when activated – to leave messages for a week before deleting them self, without allowing the user to reduce the period.

To activate the feature in Signal, open the conversation and click on the contact’s name at the top of the screen, and in the list of options you will find “Hidden messages”, activate the option and use the slider to set the time limit for deleting messages. Here, remember that the smaller the period of time, the less likely the other party will succeed in saving messages before deleting them, whether by taking a screenshot or recording the screen as a video. So if you share very sensitive information, select Hide messages after 5 or 10 seconds after activating the feature.

3- Save backups to your phone 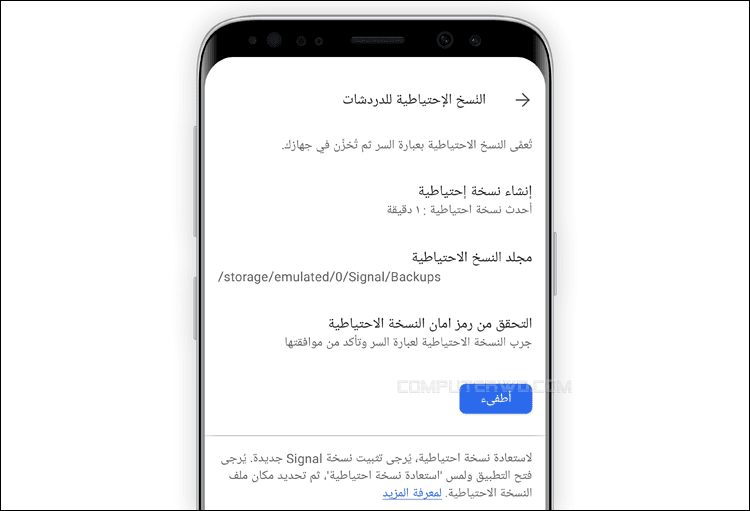 In messaging applications such as WhatsApp, a backup copy of conversations can be saved so that you do not lose their contents when buying a new phone or reinstalling the application, but mostly this backup is saved in cloud storage services, as WhatsApp relies on Google Drive to store backups. In Signal, it’s different. You can save a backup copy of your conversations, but locally, on your phone’s memory.

On the one hand, this ensures that the conversations are at your fingertips only, and on the other hand, it allows you to save multiple backups and restore any of them at any time. Additionally, when Backup is enabled, your data will be encrypted with a 30-digit passcode, which must be used to restore data back to the app after purchasing a phone or reinstalling Signal.

To create a backup of your Signal chats, go to “Settings” and then “”Chat BackupTurn on the feature. When you do, the 30-digit code will appear in front of you, you can copy it and save it in a notepad or write it down on a piece of paper. Then click on “Create a backup” and wait for the process to finish.

You’ll find the backup file (which includes your messages, photos, files, and other content) in a folder in the File Manager app, where you can follow the path that appears in the app to get to the folder. After that, the file can be transferred to the new phone, then open the Signal application to decrypt and restore the conversations as they were.

4- The ability to bypass country bans 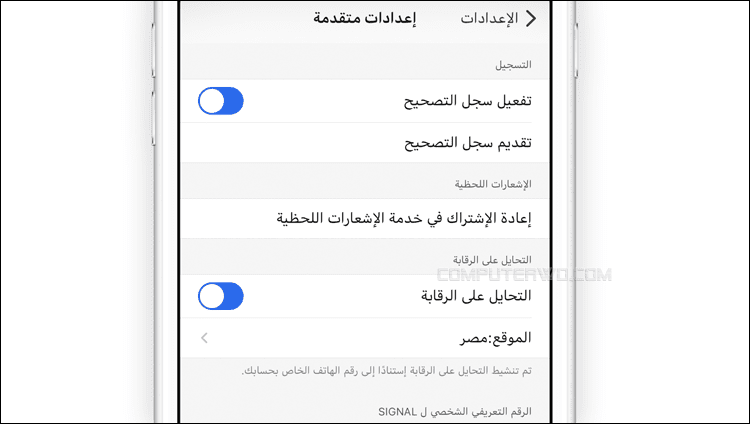 Because of its strict policy in protecting the privacy of its users, Signal has been on the list of banned applications in some countries since its launch in 2014, where it was used by activists and opponents of the authorities, not from other messaging applications, so some countries in the Middle East such as Egypt, United Arab Emirates, Qatar, Oman and others Banning the application and censoring it to prevent its use, even temporarily. But this prompted the company, Open Whisper, the developer of the Signal app, to use this technology Domain Fronting Which helps to circumvent this blocking and the continuation of the application in light of the censorship imposed on it.

After conducting a simple search, it was found that this technology in short routes messages between the parties to the conversation through a popular domain name, and thus the messages sent to ISPs look like a normal HTTPS request submitted to a Google page (www.google.com) or any other Another popular website, therefore, it is literally impossible to ban the use of the app unless the internet is completely disabled nationwide.

Through our experience, we noticed that this feature is only available in the Signal version for iPhone phones, as we did not see the option to activate it in Android, but things may change in the future. In any case, if you want to activate it, all you have to do is go to “Settings” then “Advanced Settings” and then activate the “Circumvention Circumstance” option and then choose the country in which you reside so that the application recognizes service providers, and bypassing the ban if they at any time Use of Signal is prohibited.

5- Send messages, files and photos to yourself 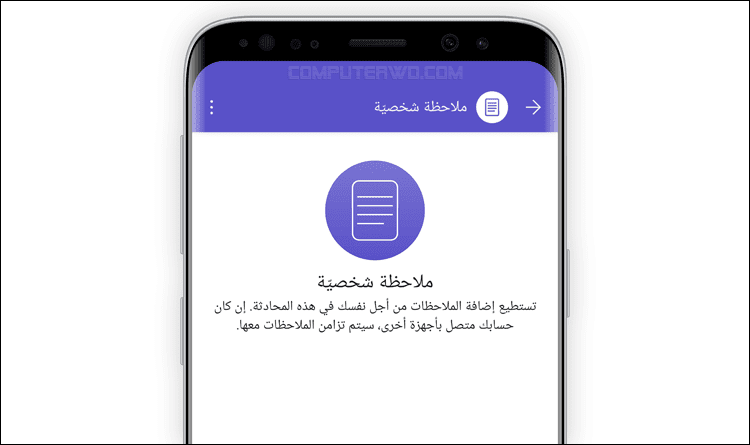 Officially, there is nothing that allows the user to send a message to himself on the WhatsApp application, as this feature is sometimes important to save important messages, notes, photos, etc. On the other hand, Signal has a “Note to Self” feature where you can simply store anything you can think of in this place, you can forward highlighted messages from any conversation, and store videos and files for later review through devices linked to the account. It’s also great that all the contents of this wallet will be encrypted like anything in Signal via end-to-end encryption so you can store whatever you want and only you can see it. 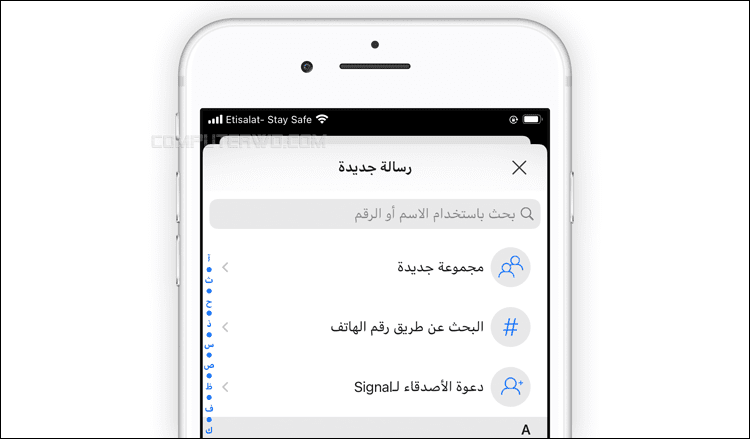 To have a conversation with another person on WhatsApp, you need to register their phone number as a contact first so that it appears in the contacts list in the application. Of course, there are some third-party applications and tricks that allow you to send messages on WhatsApp without adding the contact, but it is not recommended to use these applications because they can put your data at risk, and it may even get to ban your WhatsApp account.

While in Signal you don’t need that, if you know that the person you want to message uses the Signal app as well, you can compose a new message and click on the “Search by phone number” option and then enter this person’s phone number, then you can start the conversation immediately and the conversation will not be done Save the number in your contacts.

Of course, messages exchanged via messaging apps will remain on users’ devices unless they are manually deleted. Over time, leaving a large number of messages, including photos, videos, and other files that you share, increases the storage space occupied by the application, and once the device’s storage capacity runs out, users may not be able to keep all of these messages. This problem is known among WhatsApp users, and the solution is always to delete some messages manually.