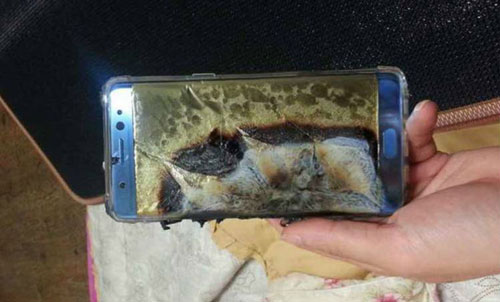 The Korean company, Samsung, has withdrawn all the copies that were put on the market for the Samsung Galaxy Note 7, and this comes after receiving many complaints from users that the phone has been burned or exploded during and after charging, and the company has already confirmed that there is a problem with the phone’s battery, which is the reason for the occurrence of this .

It is worth noting that Samsung launched the phone in 10 markets around the world on August 19, and this incident is the first of its kind, which can significantly affect the reputation of the company and other products it produces.

Samsung’s comment on the incident came that the battery was produced by various other companies, as it was found that there was a problem in the battery cells, and the decision to withdraw the phone from all the markets that was put in it came after many users of the phone after purchasing it submitted numerous complaints that it was burned during or after the charging process. It is very dangerous for phone users.

The company was not satisfied with withdrawing the unsold phones only from the market, but all the people who purchased the phone were informed of the need to return these copies to the company and obtain the purchase price in full, which constitutes huge financial losses for the company, and the Saudi Ministry of Commerce has informed everyone who bought the Samsung Galaxy Note phone 7 The necessity of returning the phones that were purchased to the company and receiving the full amount of the purchase.

Samsung said that preparing replacement phones may take two weeks, and that it is in talks about providing compensation for people whose phones were burned, and the original charger for the phone should be used as a precaution, and the phone should be placed in a far place during charging to avoid users being exposed to any damage.

Some users mentioned that the phone got burned after disconnecting it from the charger and bought it less than two weeks ago, and others posted pictures of burnt Galaxy Note 7 phones on their personal pages, and the problem was not limited to a specific region, but included several regions in different parts of the world.

The most important major ranking factors in Google

Comparability between OnePlus Nord and OnePlus 8

A free Firefox add-on to know and detect which sites are tracking your data and cookies Lightbeam-1.0.2

How to turn on wifi on a desktop computer