The official netcut for Android. netcut defender built-in that requires root. Note: For user upgrade, please restart your phone after upgrade. Or click Finish in the new version and restart. The best way to clean an old version is to uninstall, restart, and then install the new version.
What you can do with Android Netcut?
1. You can quickly detect the network user in WiFi, even when the phone does not have a valid IP address or the Internet has not been granted the use of WiFi. As long as you are connected to any wifi, arcai.com’s netcut can work.
2. Set on/off line to any of the network users, including Phone/Xbox, Softphone, PS3, PS4 etc.
3, you can disconnect the network between two network users within the local network, through one group of user as “gateways”, then cut off the other users, then these two users will not beable to talk to each other, for example: Apple TV Google TV box Xiaomi, disconnect the phone to that box, screen cast like feature will be disabled.
4. Netcut Defender built in (turn on and off in one click)
5. Scan network when you feel that there are users still on the network and you can’t see them.
6. Check phone type, netcut will be able list phones type.
7. Give the user an easy to remember name. Long press any network user, and a popup window will allow you to enter the name of the user.
8, Detect the attacker, if there is one to try to play ARP spoof for you, you will be able to see it from netcut directly.
Information about the application:
Producing Company: arcai.com
Application type: tools
Application version: v1.4.9
Application size: 12MB
Pictures from the app: 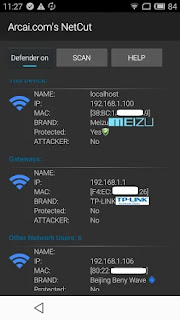 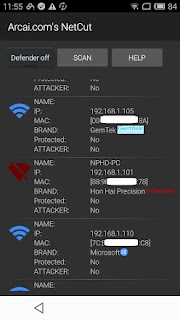 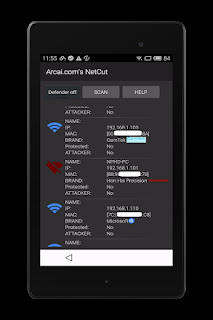