When we talk about computer viruses, what will come to mind is malicious software that infects your device and causes some damages such as file loss, device slowdown, spyware and information theft and other technical damage that does not exceed the limits of your computer, but Have you ever thought whether computer viruses can cause severe damage on the ground and affect the real lives of millions of people around the world? Or even causing a global pandemic? In fact, computer viruses cause severe annual losses estimated at billions of dollars, but there are some names that have made a mark in the history of the computer, and deservedly The title of the worst and most deadly computer virus of all time Given the enormous damage it has caused on the ground, We will mention 5 of them in this article. 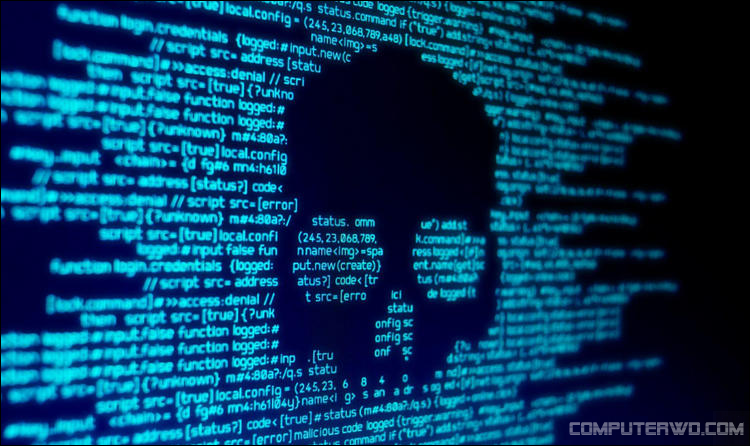 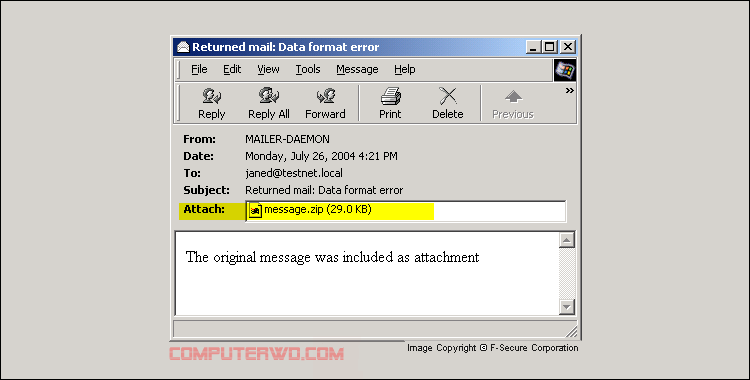 Mydoom A computer worm appeared in 2004 that infects computers running Windows. This worm spreads through e-mail messages, as it appears as a message titled “Error sending e-mail.” (“Error”, “Mail Delivery System”, “Test”, “Mail Transaction Failed”…) And inside that message is the infected email attachment, which, after running, the worm sends infected emails to every email in the address book of the infected device and publishes itself within the network, thus becoming Mydoom One of the fastest spreading email worms.

And if you’re wondering what exactly the virus is doing, it has been connecting infected machines to a network of computers that are carrying out DDOS attacks whose goal is to shut down a targeted site or server. caused by a virus Mydoom Financial losses estimated at 38 billion US dollars on the ground, possibly originating in Russia. 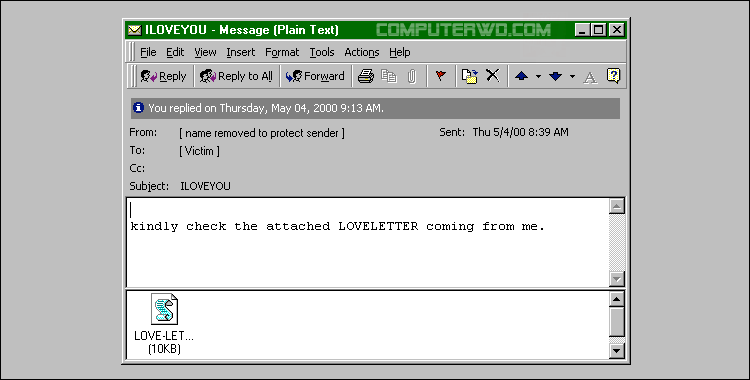 ILOVEYOU Another virus (computer worm) It deserved the title of one of the worst computer viruses in history because of the losses it caused, estimated at 10 billion US dollars. It appeared in the year 2000 and originated in the Philippines. You receive the virus by e-mail via a regular message with the address ILOVEYOUIts content is one line urging you to open the attached file, which is supposed to contain a “love letter” from the sender, and of course this is only a bait to make the recipient open the attached file (virus), which is a script.

Well, what does a virus do after running it? . . . It simply copies itself into the system folders and then the registry to run every time you start the system, and then tampers with Internet Explorer (Remember we are talking about the year 2000 here) To download a Trojan, it steals passwords, and of course then modifies the registry to make the Trojan run every time the system is started. Then the Trojan performs its job, which is to steal the saved passwords on your device and send them to a specific email that belongs to the owner of the virus, who is a university student who lacks money. He created this virus so that he could steal accounts and use Internet services for free. After that, the virus sends itself to all the mailing list saved on the infected device, and finally the virus begins to tamper with the files on the device and overwrite them (create new files and delete original files).

In addition to the $10 billion in losses, it is believed that 10% of the world’s computers were infected with a virus ILOVEYOUEven if the numbers are not enough to reveal the extent of the damage caused by the virus ILOVEYOU On the ground, knowing that a number of governments and large corporations (British Parliament, Ford … etc.) Turning off their email systems to protect against the virus will suffice. All of the previous viruses may not have been heard of because they are a bit old, but the WannaCry ransom virus has certainly heard about it in recent years, specifically from 2017, when it was similar to a global epidemic. WannaCry It is a malicious program used to extort money, as it seizes the Windows computer, with all the files inside it and encrypts them or holds them hostage, if you will, in exchange for a ransom of $ 300 in Bitcoin (later it became $ 600) that the victim demands to pay to decrypt Encrypt and restore its files. If the victim does not pay the claimed ransom within 3 days, their files will be permanently deleted.

ransom virus spread WannaCry In about 150 countries infected a huge number of computers (about 230 thousand devices) And causing paralysis in many companies, hospitals, and government organizations, as well as causing huge losses estimated at 4 billion US dollars around the world. 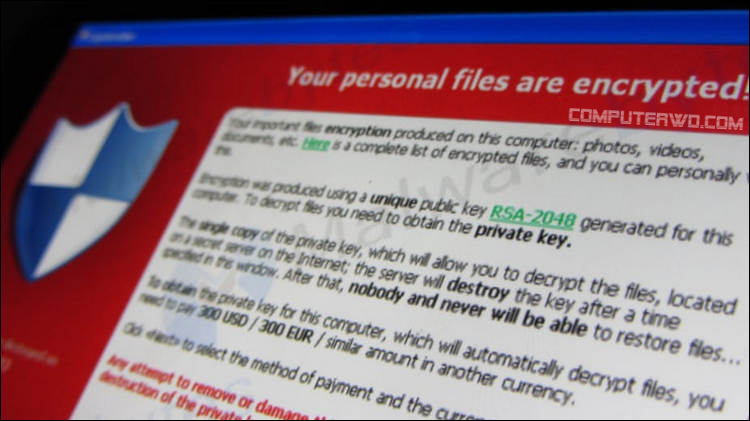 Before WannaCry, specifically in 2013, a fierce ransomware virus known as . appeared CryptoLocker It was one of the most dangerous types of ransomware. CryptoLocker It is a Trojan horse that targets Windows devices and spreads through emails (infected attachment). When it infects your device, it encrypts your files and asks you to pay a certain ransom via Bitcoin ($400) In exchange for decrypting your files and returning them to you again, of course you have a specific deadline and deadline that you must pay before it arrives, and if the deadline expires and you do not pay, you will lose your files forever.

After the arrest of the leader of the group that created this virus, the decryption keys were released and made available to the public so that the 500,000 victims were able to decrypt their files for free. As for the losses, there is no specific number, but the closest thing is what the site has done ZDNet Famous for tracking 4 Bitcoin addresses posted by users infected with ransomware CryptoLockerAnd the results were 27 million dollars transferred to those addresses (Some sources have reported double figures based on the average cost of losses caused by ransomware attacks to businesses.) 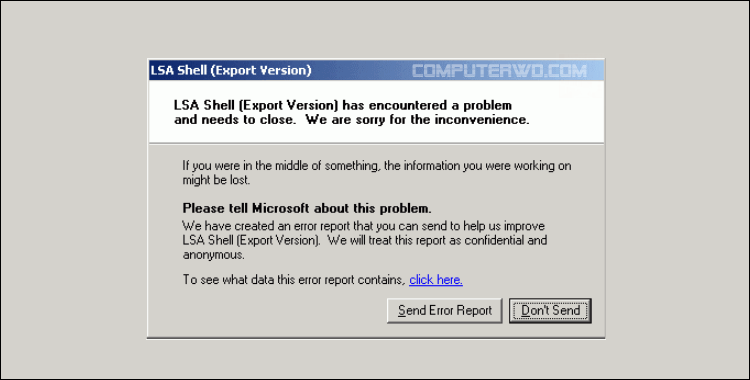 Sasser It is a computer worm that appeared in 2004, infects Windows operating systems, made by a 17-year-old German computer science student at the time named Sven JaschanThe cost of damage caused by the virus has been estimated Sasser With $18 billion. When a virus hits Sasser It slows down the computer and causes it to crash, and it also makes it very difficult to turn it off without cutting off the power to the device. This may seem to you a simple thing and will not have that significant impact on the ground, but the reality was exactly the opposite, with more than a million computers infected with this virus, it had a severe impact on airlines, public transportation, news agencies, companies, Hospitals, banks… and others, all of this had devastating effects on people’s real lives.

Unlike other computer worms, Sasser It was not spread via e-mail, but through a security vulnerability present in the Windows system at the time, when the virus infects your device, it searches for other weak or not immune systems from the vulnerability, then contacts them and infects them with the virus.

Finally, As you can see, computer viruses may have destructive damage on the ground, and they may transfer to your device quite easily, so it is better to take your precautions first, as you know “Prevention is better than cure”Therefore, I advise you to read the very important topic Five steps to protect your device from computer viruses. Finally, I would like to tell you that the list is random and not ordered on any basis, and of course there are many other viruses that deserve the title of the worst computer virus, but I did not mention them, and I contented myself with only what I find interesting.