At a time when Google is preparing to launch the official version of Android 12, Samsung has finally started rolling out the first beta version of its modified interface of the new system — One UI 4 — Whereas Samsung S21 and S21 Ultra users can now register for the program One UI Beta Via the Samsung Members app to get the update before the official release. And if you’re using another phone and can’t join the beta program and want to know the most important new changes, you’ve come to the right place!

We were already able to get the One UI 4.0 beta update and spot new additions and features. While the update does not include a drastic change in the system interface compared to previous versions, but some elements of the “Material You” design, which is the most important new feature in Android 12, have been adopted, but there are still new features added by Samsung that will keep you excited to receive the new update, let’s review the most important ones Below. 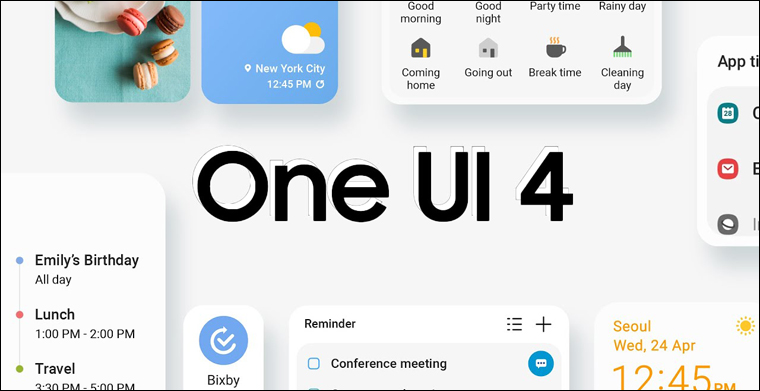 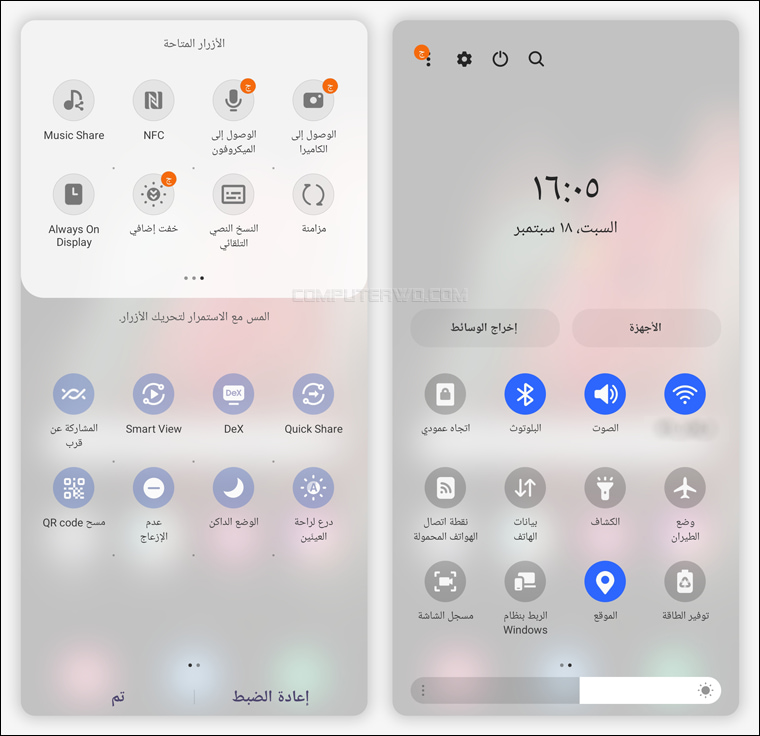 The One UI 4 update introduces an improved look to the quick settings panel that appears after swiping down from the edge of the top screen, that is, the panel still retains the usual Samsung design instead of the Google design used in Android 12, but there are some minor changes such as making the brightness control bar larger, Which makes it easy to see and adjust. The transparency of the notification page is less than before and this can be easily seen when you don’t have any notifications displayed as well as when using the Light Mode.

Other than the changes, there are 3 new “shortcuts” that Samsung has added to the panel, including two options to block all applications from accessing the camera or opening the microphone, and another option to activate the “Shortcut” mode.Extra dimmedWhich is one of the main Android 12 features, which reduces the screen brightness to levels below the permissible limit to protect the eyes from the high light emitted by the screen when using the phone in places with very weak lighting that is almost non-existent, which causes headaches and fatigue, and it also has a positive effect. On battery life, the lower the brightness, the less power the screen consumes, so I see it as one of the features of One UI 4 that everyone will undoubtedly benefit from.

Coordination between foreground and background colors 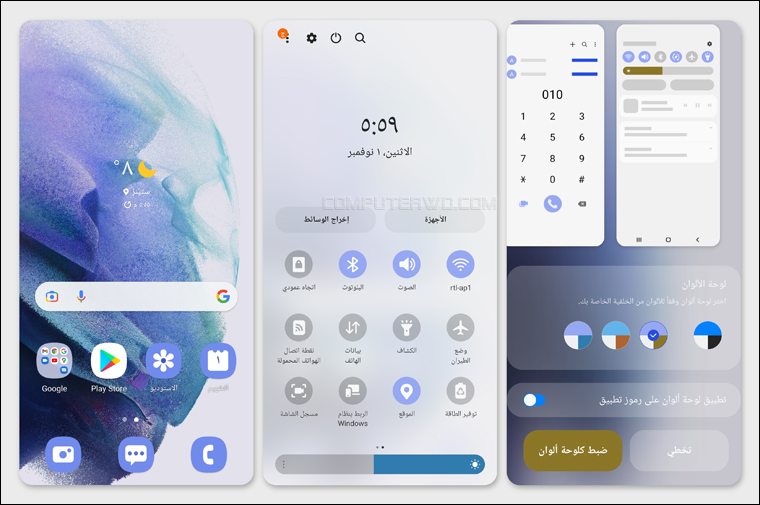 Samsung has adopted one of the best new Android 12 features with this update which finds part of the Material You design language announced by Google. This design language offers users creative freedom, enabling them to customize the finer aspects of their phones. Through this new “Color Palette” feature, the user can choose from custom color palettes that are applied at the system level and whose colors are consistent with the background colors used for the home screen and lock screen.

At any time, when you set a new wallpaper for your phone screen, you will get various color options to choose from. These custom color themes, which are directly inspired by the background colors, are applied throughout the phone, including application icons that support Material You design language and look amazingly attractive. 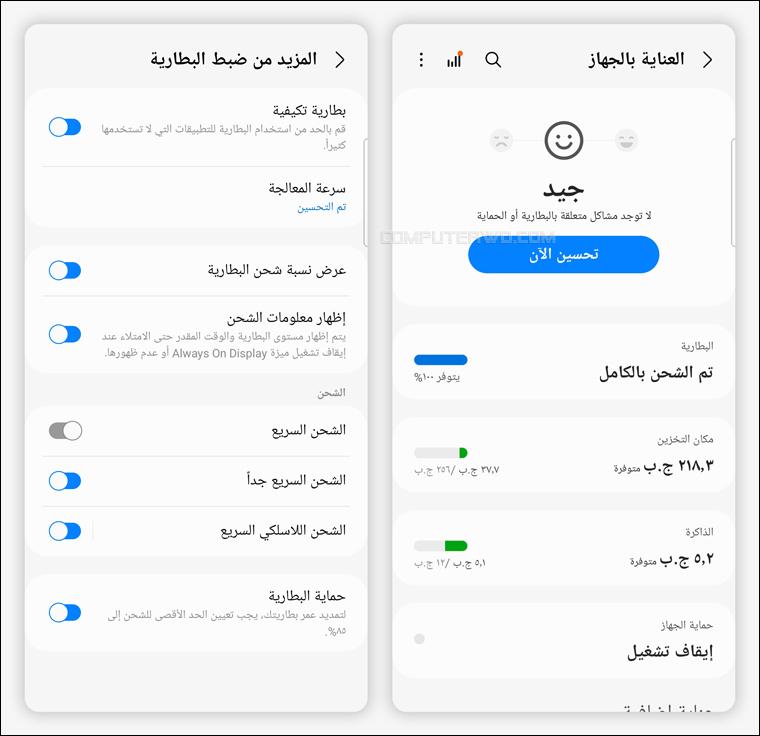 The “Battery Protection” feature that Samsung added exclusively to the Z Fold 3 and Z Flip 3 is now available with the One UI 4 update for all users without exception. This feature, as its name suggests, aims to preserve the phone’s battery life as much as possible and this is done by stopping the battery charge once it reaches 85 percent power, which prevents the battery from being fully charged to 100 percent which, according to Samsung and other phone manufacturers, damages the battery on Over the years of use.

This feature can be activated through the Device Care application after opening it when you go to “Settings” and within the application, click on “Battery” and then “More battery settings”. By default, the feature is off, but we think it’s important and you should activate it once you update your phone to One UI 4 if you want to get as many years of phone use as possible, especially considering the difficulty of replacing the battery in modern phones in general.

As you can also see, Device Care has got a completely new design and a simpler interface to help you quickly diagnose your phone’s problems and improve its performance. The phone’s general status is now displayed as an emoji, rather than just a raw result, and a quick shortcut to the Phone Tests page in the Members app is displayed.

RAM Plus feature to improve performance 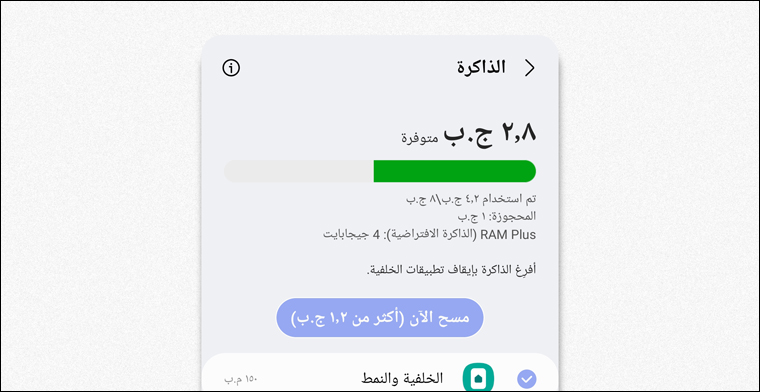 Also among the new additions in the Device Care app with the One UI 4 update is the RAM Plus feature, which expands the amount of random access memory (RAM) available on the phone by using 4 GB of internal storage as default memory, similar to the way Windows allocates a certain amount of memory. of the hard disk space to be used as virtual RAM when the actual amount of RAM runs out.

While smartphones already come with quite enough RAM these days, but there are times when you might need that extra boost while gaming or multitasking between apps, the new feature will inevitably help you get better performance. To find out whether the feature is enabled on your phone or not, open the “Device Care” application and click on “Memory” and you will find under the usage details “Virtual Memory”, which indicates that the feature is activated and is already in use by the Android system. 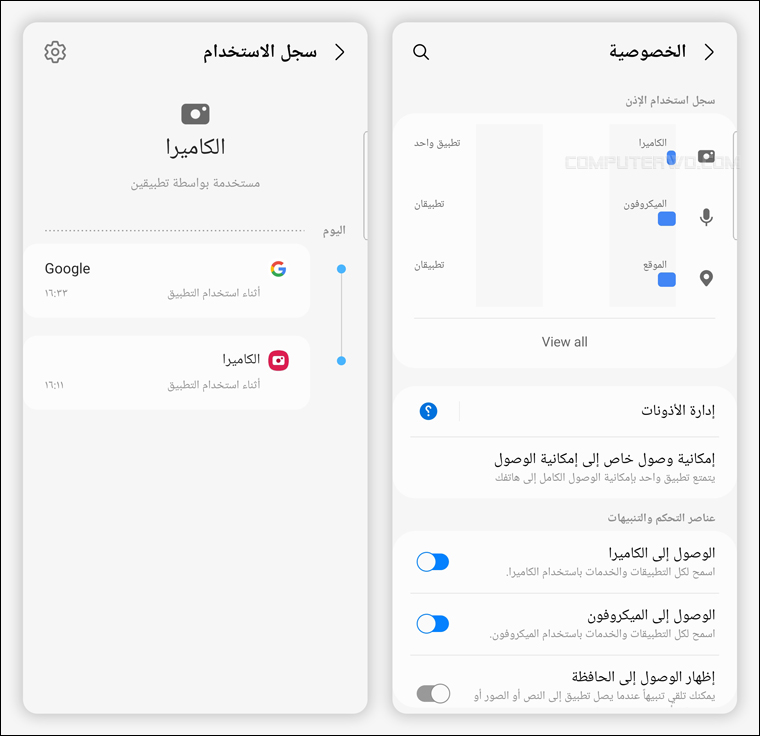 Most of the improvements and new features with the One UI 4 update are privacy related to provide maximum protection for users. Now the “Privacy” page in “Settings” got a new design and additions that were not present before, such as “Permission Usage History”, which displays all the permissions that each application used individually over the past seven days and not only within 24 hours as it was In previous One UI versions, for example, you can see when Instagram used the camera app during the day and when specifically WhatsApp used the microphone from this history.

On the Manage Permissions page, you can permanently deny camera, location, and microphone permissions to certain apps or prevent them from taking advantage of the granted permissions unless you use them in real time. In general, we find that the new look is just an adoption of the Privacy Dashboard feature in Android 12, but with a Samsung combination to suit the design of One UI!

Alert indicators when using the camera or microphone 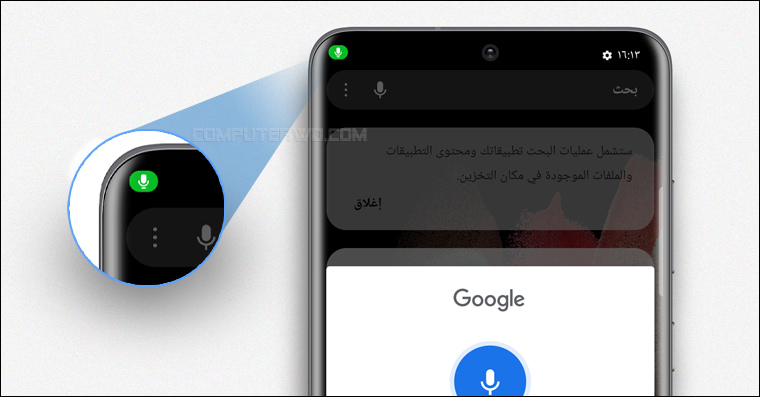 As in iOS 14 for iPhone phones, One UI 4 shows a small indicator in the upper left corner of the screen in green when using the microphone or orange when using the camera, and a click on this indicator shows the name of the application that is using this permission now. As we mentioned before, you can use the Quick Settings panel now to temporarily block all apps from using your camera or microphone if you suspect someone is trying to spy on you.

Delete objects from a photo directly from the Gallery app 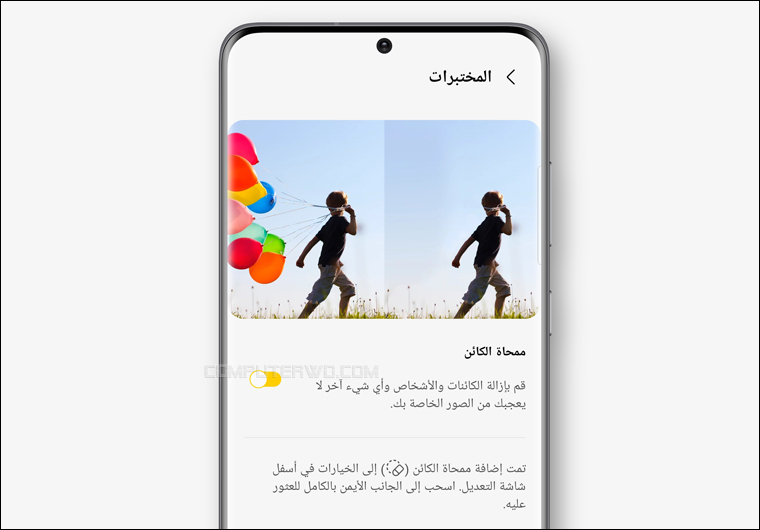 The Gallery app got its share of new additions with the One UI 4 update, such as the ability to see where each photo was taken on a map, similar to the Google Photos app. But the most important feature that Samsung has added to its gallery is the Object eraser which allows you to add edits to any photo and delete objects or people from it without leaving any trace of something being deleted.

And instead of relying on external applications, you can now open any image in the gallery and then click on the “Edit” option, then open the menu by pressing the button ( ⁝ Then you open the Labs page and activate the new feature. You can use Object eraser on any image by drawing a circle over the items to be deleted and leave the rest on the app. When you are satisfied with the result, press OK to save the image.

Prevent apps from pinpointing your exact location on the map 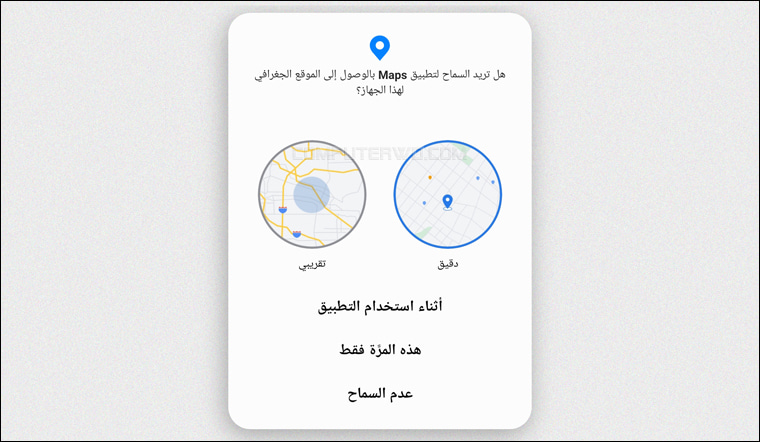 Once again, another addition to One UI 4’s extreme privacy features. Now you’ll also get a popup every time an app asks for your location, and the choices aren’t limited to whether you want the app to know your location always, once, or Absolutely not, but you can also choose between knowing your approximate or exact location on the map which is important to protect privacy.

For example, if you use any of the weather apps, you can allow access to your approximate location since there is no need to know exactly where you are to view the weather. But when using navigation apps like Google Maps, it makes sense to let your exact location know. Just a small but essential addition for those interested in applying the highest standards of privacy.

Turn on Always On Display only when receiving notifications 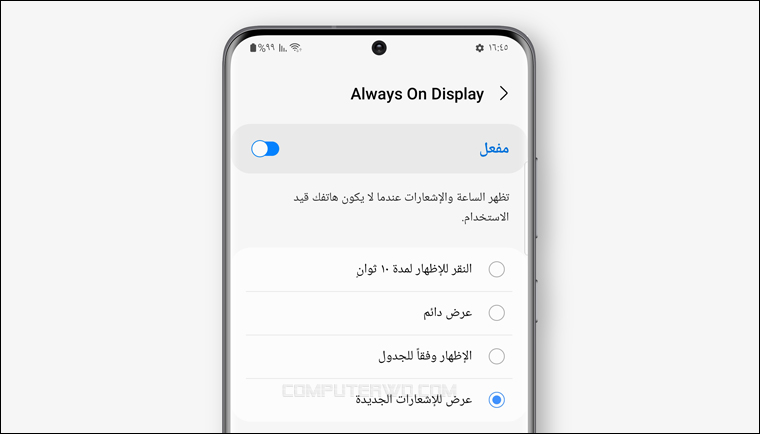 This is a very useful feature, at least for me! Now instead of leaving the Always On Display feature always on, thus consuming a lot of power, the One UI 4 update brings a new option that allows it to be set to run only when new notifications are received. And if you’re interested, there are also a number of new stickers to use to decorate the AOD interface according to your preference.

Of course, there are other features that the update brings, but we tried to choose the ones that are most important to the majority of users, bearing in mind that we are talking about the first beta version. Samsung may add more features in upcoming updates and we will monitor them and update this topic immediately if it turns out to be useful and important.